If not, it's is not to late to get STARTED! Click to schedule an interview TODAY!

​The United States of New Year's resolutions: CrossFit was the most Googled way to get healthy for 2020, Kansas and Oregon want to ditch the double chin and South Dakota is desperate to lose love handles

Every New Year's, millions of Americans make resolutions to become healthier whether it's to exercise more regularly or eat better.
Now, a new survey has revealed the health and fitness terms most searched in Google in every US state for 2020.
CrossFit - the popular strength and conditioning program - was the term most typed into the search engine with one-quarter of states looking it up on New Year's Eve or Day.
Many states shared those commons searches, but others had more unique ones ranging from 'fat transfer' to 'best juice cleanse' and even two states concerned about how to get rid of a double chin.
​ 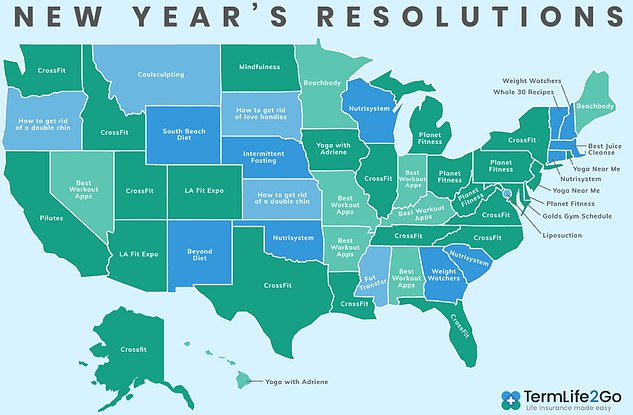 Most Americans with New Year's fitness resolutions Googled CrossFit, but residents of Kansas
and Oregon were most concerned about how to lose a double chin
For the survey, conducted by TermLife2Go, an online life insurance agency, the team looked at the most frequently searched terms in each fitness-related category on Google Trends during New Year's Eve and New Year's Day.

The terms were then searched back through Google Trends to discover which states had the highest search volume for each.
CrossFit was the most searched term in 13 states: Alaska, Florida, Georgia, Idaho, Illinois, Louisiana, New York, North Carolina, Tennessee, Texas, Utah, Virginia and Washington.
With more than 13,0000 gyms in 120 countries, the program has emerged as one of the biggest fitness trends - if not the biggest trend - according to CNBC.
The next closest, chain gym Planet Fitness, has around 1,800 locations.
Residents of Kansas and Oregon were most concerned specific body parts, namely how to get rid of a double chin.
While eating a poor diet or gaining weight can lead to the development a double chin, other factors include age, genetics and posture - all of which cause the skin to lose its elasticity.
Meanwhile, South Dakotans were most concerned about how to lose 'love handles,' areas of skin around the hips and abdominal area caused by excess fat.

However, several studies have shown that it is impossible to specifically exercise just one area of the body to lose fat in that area.
That's because when the body burns fat stores during exercise, it doesn't do so from the muscles being worked out but from the entire body.
So whether you're looking to lose fat from your chin or hips, you'll have to lose weight overall.
Other states had more unusual searches such as Mississippi, whose residents were most interested in fat transfers.
A fat transfer is a procedure by which fat is taken from one area of the body and used to fill in volume in areas such as the face, breasts and buttocks.
Fat transfers in the face were the eighth most popular surgical cosmetic procedure performed with more than 54,000 occurring in 2017 - the most recent data available - according to the the American Society for Aesthetic Plastic Surgery.
Meanwhile Massachusetts residents wanted to learn more about juice cleanses, which involve consuming only fruit and vegetable juices for around three to 10 days.
Proponents say there are several benefits, including supplying the body with high amounts of vitamins and minerals and flushing toxins from the body.
But health experts say juice cleanses are too low in daily calories, don't provide the body with a balance of protein and healthy fat, and that there is no evidence that any part of the body is detoxified.
The most searched term in California, ever the epitome of health and wellness, was Pilates while neighbors Colorado and Arizona.

This write up is from the Daily Mail .com
By MARY KEKATOS HEALTH REPORTER FOR DAILYMAIL.COM
PUBLISHED: 12:44 EST, 16 January 2020 | UPDATED: 16:38 EST, 16 January 2020
​
https://www.dailymail.co.uk/health/article-7895601/The-United-States-New-Years-resolutions-Crossfit-Googled-plan-2020.html?fbclid=IwAR0SW5pD_Rymusq65H6430vXualY04Yyv6ZBRMtnpk_unMNQtzwiEqjWSyU